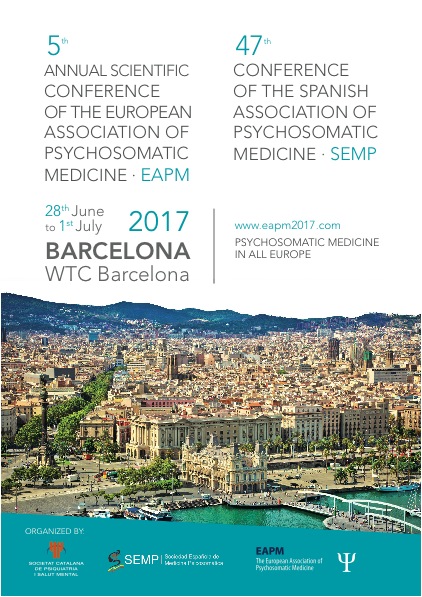 Summary of the fifth annual EAPM conference in Barcelona 2017

After the successful events in Cambridge, Sibiu, Nürnberg and Lulea, Barcelona had the honor to organize the 5th Annual Scientific Conference ofthe European Association of Psychosomatic Medicine (EAPM) from June 28 to July 1, 2017.

The host of this meeting was the Catalan Society ofPsychiatry and Mental Health (SCPiSM), which co-organized the meeting with the Spanish Society of Psychosomatic Medicine (SEMP). The theme ofthe Conference was “Bridging the Split between Soma and Psyche”. We went from the north, right beneath the Arctic Circle in Lulea in Sweden in 2016, to the south, to the Mediterranean city of Barcelona inCatalonia, Spain. The meeting was held at the World Trade Center, a spectacular venue on the seafront in Barcelona, surrounded by the sea on three sides, with ships navigating back and forth from the main port.

The meeting attracted a large number of submissions for symposia and for oral and poster presentations. As the main conference organizer, it was challenging and complicated to put the program together, and avoid overlapping between chairs, presenters and topics. In addition, this year we organized the EAPM meeting to coincide with the meeting of the Spanish Society of Psychosomatic Medicine (SEMP), which had its own program. With all these conditions, it seemed initially that it would be rather difficult to get coherent and cohesive programs for the two parallel meetings.However, we were lucky and we did it.

The final conference program for the EAPM meeting included 4 plenary sessions, one special lecture by Professor Antonio Lobo, 33 symposia promoted by the EAPM and 18 by de SEMP, and more than 160 posters. The conference was awarded 26 credits of the European Accreditation Council for Continuing Medical Education. For the third time, we also organized a pre-conference joint meeting, between the Academy of Psychosomatic Medicine (APM) and the EAPM, which consisted of 3 sessions. Finally, for those seeking expert state of the art educational updates we offered 3 Master Classes, which were all well attended.

The final number of registrants for the main EAPM meeting was 494 people, who came from 45 different countries.The EAPM awarded travel costs for 10 young researchers: one from Netherlands, one from Denmark, three from Germany, one from Belgium, twofrom Romania, one from Italy, and one from Israel.

The APM-EAPM joint preconference sessions focused on the use of new technologies in Psychosomatic Medicine. American and European experts such as Professors Jeff Huffman, Tim Hoff, Brjann Ljotsson, Manfred Beutel, and Bob Roland presented talks on a range of topics including how tobenefit from apps and how to deliver internet-based psychotherapy for psychosomatic conditions. However, problems resulting from these new technologies, particularly for the quality of the doctor-patient relationship, were addressed too.

In the evening of the first day of the meeting, Professor Antonio Lobo from the University of Zaragoza presented a special lecture about the past,present and future of psychosomatic medicine as a distinct medical discipline. This presentation took place in the Saló de Cent in the city hall ofBarcelona, which is the site where one the oldest“parliaments”worldwide started to have their meetings during the 13th century.The main conference offered three scientific master classes which werefinancially supported by the Carus Foundation: Professor Fink and Professor Jorgensen from Aarhus University spoke about functional disorders; Professor Ljotsson (Stockholm) spoke about his research on exposure-based behavior therapy for irritable bowel syndrome; and Professor Maldonado (Stanford University) presented a masterclass on the prevention andtreatment of delirium. All three master classes were fully booked.The main conference began with a plenary session by Professors Arno Kumagai (University of Toronto) and Jeff Huffman (Harvard University),who spoke about bridging the gap between soma and psyche. Dr. Kumagai focused on medical education and Dr. Hoffman on collaborative care. Thetopic of the second plenary session was functional somatic syndromes. Professors Francis Creed and Judith Rosmalen shared a joint presentation about the nature and aetiology of functional somatic syndromes, and Professor Per Fink, the recipient of this year’s Alison Creed Award, spoke aboutthe treatment of bodilydistress disorder. In the third plenary, Professor Graça Cardoso, the recipient of the Frits Huyse Award, talked about thedevelopment of consultation liaison psychiatry in Portugal and the challenges for the future. In the same plenary, Professor José Maldonado presented an authoritative update on the pathophysiology, risk factors and sequelae of delirium. Finally, the conference ended with the last plenary session which included a presentation by Professor Christiane Waller, who talked about how adverse early life experience predicted physical health inlater life, and a talk by Xavier Labad, who described how stress hormones can affect the human cognition. The plenary ended with a talk from Jorge Palacios (King’s College, London), the winner of the 2017 young investigator award, who presented his work looking at different trajectories of depression in patients with heart disease.

In the Barcelona conference, the poster session was preceded by a“one-minute oral session”, where 20 selected posters on merit were presented by their authors in just one minute and with one slide. The one minute presenters had to use all their guile and wit to encourage attendees to visit theirposter during the regular session that followed. Remarkably nearly everyone kept to time!

The conference dinner took place at the Olympic Harbor and was a great success. Not everything, however, went to plan as we would have hoped. There was relatively little overlap between the main EAPM meeting and the parallel Spanish SEMP meeting. Most EAPM attendees could not attend the SEMP sessions unless they spoke Spanish, and some of the SEMP sessionswere under-attended because of the draw of the main EAPM meeting.It was also our goal to use the meeting in Barcelona to promote there cognition of Psychosomatic Medicine in Spain as a distinctive discipline and specialty in its own right. This however is something that will still need to be addressed by the Spanish Society in the future, and there are a variety ofdifferent models under consideration.

We were proud to get to know from many attendees that the Barcelona meeting was one of the most successful EAPM meetings in recent years.We look forward now to Verona in 2018, and we are sure that the warmth and spirit of the meeting in Barcelona, as well as the excellence its presentations, will be replicated on Italian soil. 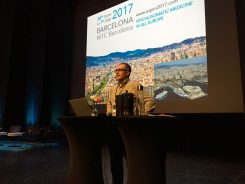 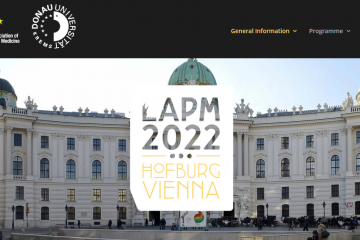